Membership, Loyalty and Rewards Programs: A Survey of Best Practices

For most practices in the elective healthcare industry, competition is often on practice leader’s minds along with the importance of maintaining strong patient loyalty. As industry experts, we are often asked what are considered to be the best rewards program models and how they are run.

There has not been a lot of research done around this topic so we went out and conducted a type of survey of our own. In this month’s blog post, CEO Ryan Miller discusses the findings and the most important factor in the success of any type of patient loyalty program.

Hey everybody welcome back, it’s Ryan Miller with Etna Interactive and we’re going to talk today about one of the most popular trends that we’ve seen in the aesthetic industry; those loyalty or rewards programs that are out there. Now it’s easy to understand why they’re so popular, we’ve all seen the mechanics, the data that suggest that it’s seven times less expensive to keep a patient that you already have inside the clinic than to go out and acquire a new one. Now as we talk about these programs one thing I do want to frame in, I’m explicitly not talking about those programs that are available to you from your industry partners, but instead those programs that are actually operating inside of independent clinics. Programs that you’ve set up and that you operate yourself. But I want to start by asking you a question: One of the questions I often like to ask to help people reflect on this question, and it’s especially powerful, I think for the women in your office is to think first about those relationships in your life, those service relationships where you would expect loyalty to be a normal thing. And often my female friends will tell me ‘Well I have a very loyal relationship with my hairdresser.’ To which I ask back, ‘How many times does she get to screw up your do before you’re out the door?’ And the answer I usually get back is, ‘One time.’ Some people are generous and they’ll say two times. As we reflect on this we have to ask ourselves, if we really think our patients are loyal, that they will come to us no matter what the circumstances or conditions, we might be kidding ourselves. So it’s better to think of these programs perhaps as rewards programs, rewards for well behavior that we really want inside of those relationships. 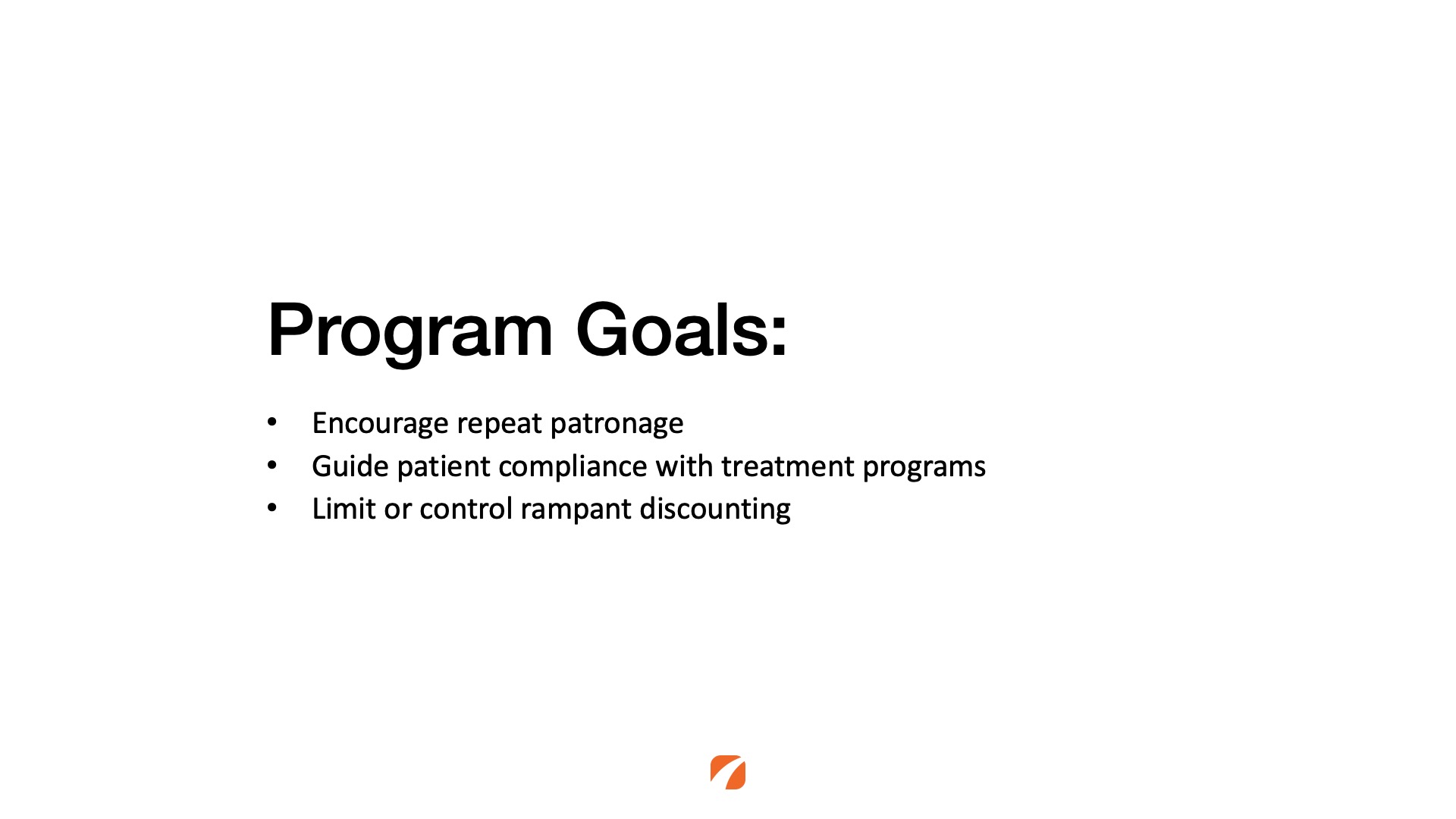 Right, we want repeat patronage, we want them to choose to come back to our office. We ultimately want them to be compliant, we want them to follow our treatment recommendations, not only with the services but on the timeline that we recommend, and we want to try to control discounting. I think this is perhaps one of the reasons people are most interested in these kinds of programs is because it allows us to, well, respond to that patient who says, ‘Well do you have a special coming up on BOTOX?’ Well we don’t, and in fact we almost never offer specials however, our best available pricing is on offer for you today all you have to do is become a member of our rewards program. It gives us that ready answer to the pricing objection.

Now what we’ve done because we get asked all the time:

“What is the best way for us to run and what are the best mechanics of these loyalty and rewards programs?”

We went out and we did a survey. Now it’s not a scientific study. We identified one hundred aesthetic clinics in North America that were using words like loyalty, rewards or membership on their website, so it’s a focused sample, and then we broke those programs into five categories. What we found, and these are listed in order of popularity: Let me talk a little bit about what we saw in each case. Now the monthly subscription model, this is where individuals are paying a contracted monthly fee for some prescribed list of services or some selected discounts. It’s very similar to like a gym membership. The range in pricing and services was highly variable, these were all over the place, but this was the least frequent option. Now what we’ve seen is that there are a number of software providers that are now offering solutions that make these programs more viable. Historically given the complexity administering these campaigns probably explains why it’s so infrequent among the sample population that we looked at. Now restrictions that were common in these particular programs were the kind of services that were included in there, and the offer or restriction that you couldn’t combine program participation with periodic sales, specials or discounts that were out there.

The cash back model was next in line, but still fairly infrequent. You earned credit back when you bought specific services inside the clinic. It’s similar to like the Discover card that has a cash back offer it ranged from 5% off but only 4 out of the 100 clinics that we surveyed actually were offering this particular model. Now there were a lot of restrictions in this particular case, you didn’t earn points when you bought discounted or promotional items, it wasn’t good toward insurance co-pays because many clinics offer both cash services and insurance reimburse services. And everybody was requiring that the amount that you redeemed, that you effectively zeroed out your account redeeming that cash back amount all in one lump sum, probably for logistics reasons, right, difficult to track that.

Now the third program in line that we took a look at were these tiered rewards tied to some level of annual spend. You earned discounts or some kind of special benefit as you spent more inside of the practice. Now these are very much like airline miles programs. As we looked at what was common out there in the marketplace, we saw some programs that were based largely on three tiered systems, most of them starting at a minimum threshold of $3500. Now again, it’s a fairly small sample when I say most of them. Only 6 in 100 practices that we found were offering this kind of program. The tiers reset every year, kind of your leveling just like with airlines. Every year is based on your last year’s investment with that business, and again promotional purchases often were excluded from that spend calculation. Now, where did we see the real bulk of the programs that were out there in this vain? Annual membership was certainly, we’re getting into the territory of programs that were much more popular. Right, you pay up front and you get some kind of VIP benefits package. It’s very much like an Amazon Prime model. And what we found is that there was a fairly wide range in terms of the tiering system but we’re able to distill it back into two common models, a tier one level of benefits at about $350 for again an annual fee, and tier two for an annual membership fee of $750 is roughly the range. 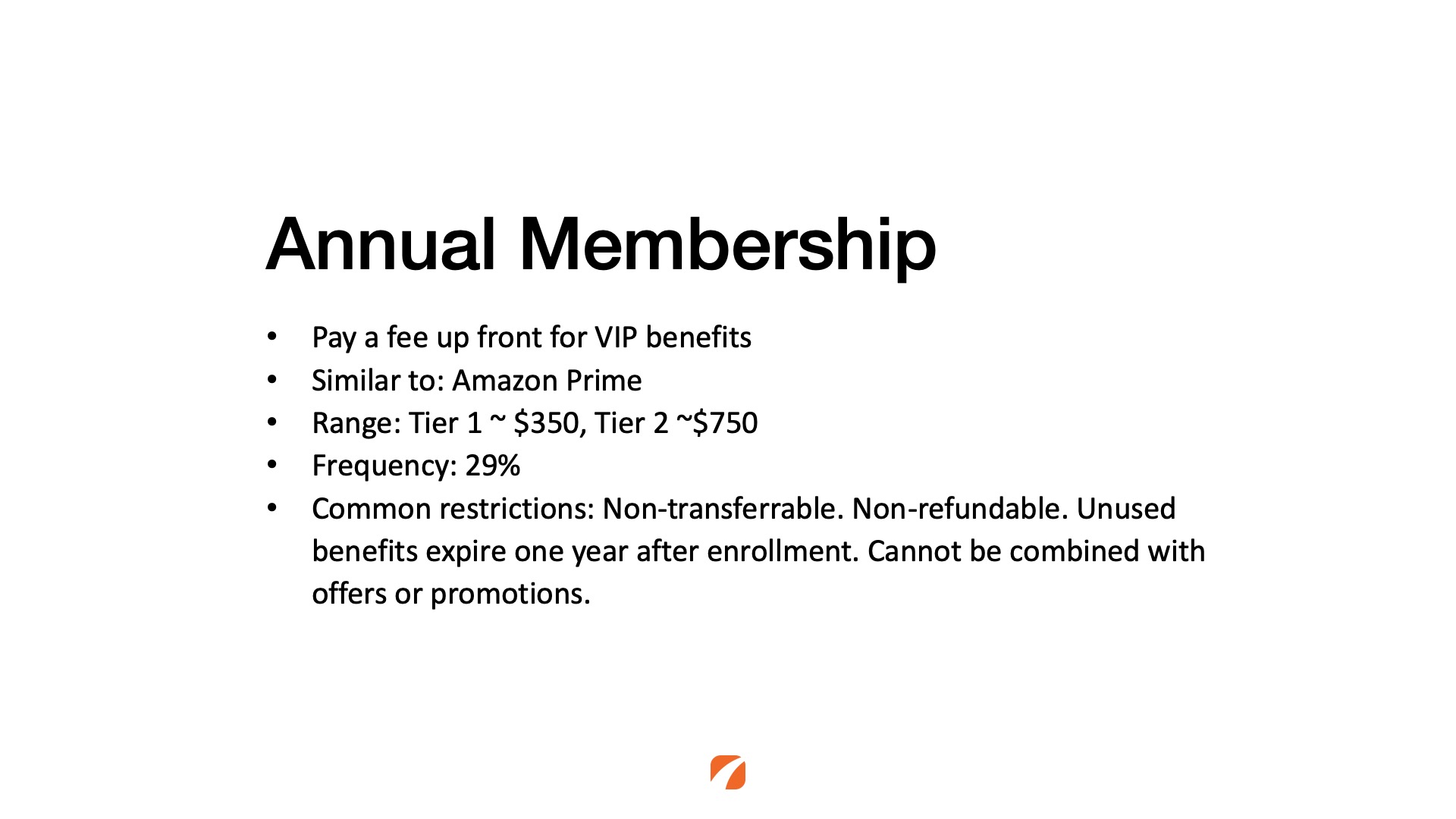 Now this was a full 29% of the sample population that we were able to discover, but again a decent number of restrictions. These weren’t benefits that were transferrable so if you wanted out you couldn’t give this program to a friend. These were non-refundable, once you paid in you were in for the full year, any un-used benefits expired at the end of the year and we saw that you couldn’t combine these with other offers. So if you’re contemplating this kind of program you might also contemplate these same kinds of restrictions or requirements.

But by far the most popular program that we saw were points based systems. Points that were accumulated inside the clinic with every dollar spent. This is very, very similar to those general credit card rewards programs, right, every dollar that you put on your credit card you earn some kind of point for redemption in the future. What we found is that $1 was being used to equal 1 point, but that in the range of 1000 points was being used to redeem for either $20-$50 inside the practice depending on how generous the practice that was running the program was feeling. 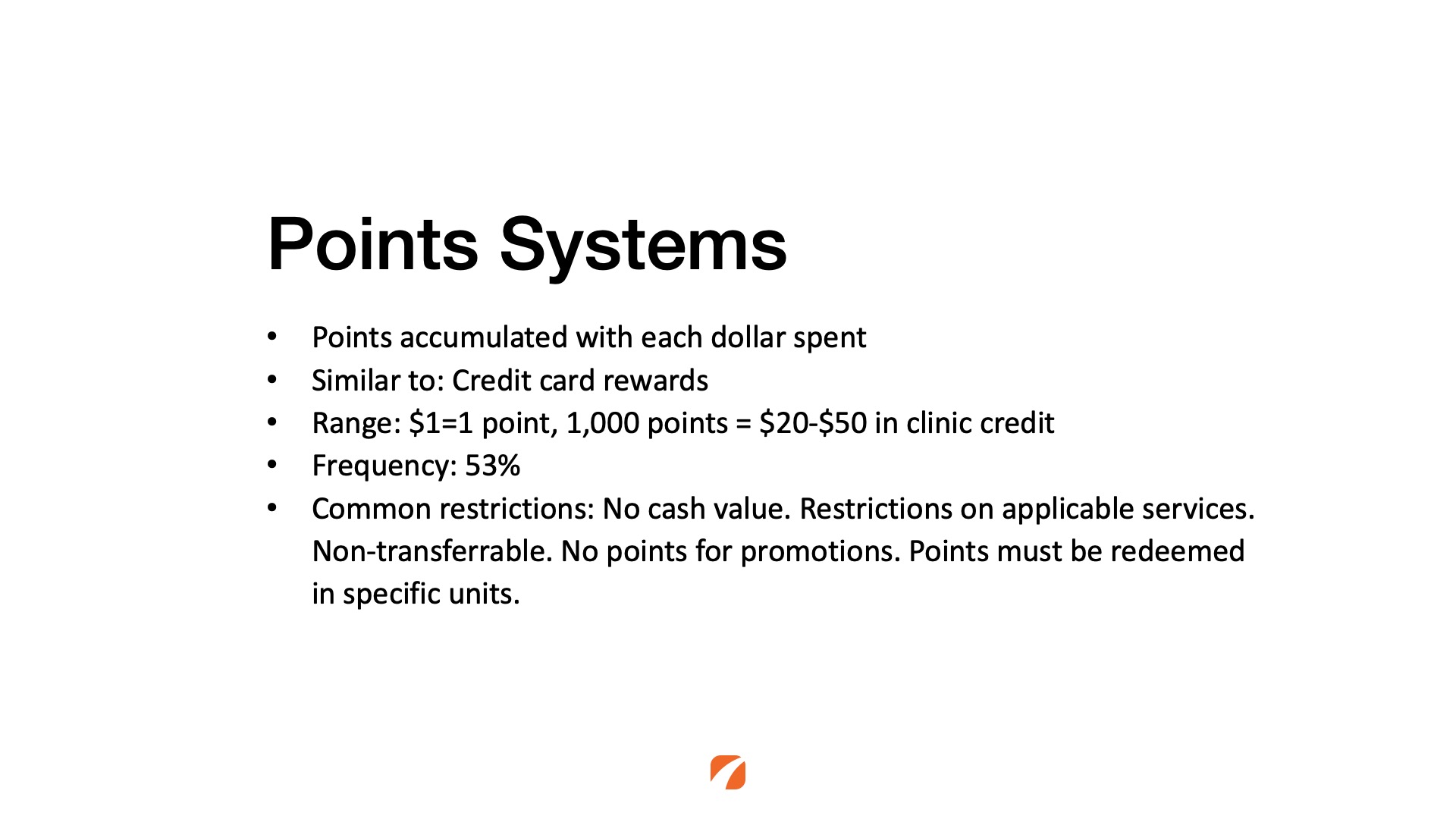 Now this was 53% of all the programs. Why so high? What we found is that for many clinics they have software that natively supports this kind of program making it one of the easiest to administer. Now commonly what we found is that these programs put limitations like you know your points didn’t have cash value so you couldn’t draw cash back out of the practice. There were restrictions on which services were ultimately used for points accumulation. When promotions were offered patients weren’t accumulating points because they were already proactively receiving a discount for that particular service, and that they required very often that points were redeemed in specific units, that there wasn’t the ability to get pennies back on procedures.

Now for most practices what we found is that the available technology does seem to be the major driver in which program they’re choosing. Now this research is really just intended to give you the framework to understand where you might go in developing a loyalty or rewards program for your practice. But there was one truth that we found from all the work that we’ve done among our clients and it’s this: that ultimately if you want to be successful with this kind of program it’s not about the mechanics you choose, but what we’ve found is it’s about staff engagement. The extent that your staff believes in the program, they’re excited to talk about the program and that you maybe are even incentivizing them to invite people to join and subscribe to your program, that’s ultimately where you’re, and how you’re going to see the highest rates of adoption for this kind of program inside your practice. We hope the research is going to help you develop your own program. If you have feedback be sure and share your comments right below this posting in our blog.

3 Responses to Membership, Loyalty and Rewards Programs: A Survey of Best Practices