Photo Gallery Optimization: A boast, an epiphany and a spoiler

Follow along as Etna Interactive CEO, Ryan Miller walks us through metrics we’ve seen from new software we are proud to be offering the industry, DIY tips for photo gallery optimization, and a hint at what you can expect from us in the future when it comes to taking your galleries to the next level.

Hi again, it’s Ryan Miller with Etna Interactive, we’re back today and I’m going to do something that I don’t usually do. We’re going to be talking about before-and-after photos, and specifically photo gallery optimization, but I’m going to lead with a boast, something I don’t do very often, we’ll talk specifically about a related epiphany, and spoiler alert, I’m going to share some insights about something that’s going to be coming in just the next couple of months. Now if you’ve been paying attention, we’ve been talking a little bit over the last year about Curator B&A, our photo gallery management software that’s part photo editing tool and part marketing automation tool.

Now we’ve been out there for about a year with the software so we have some really exciting data to share about those kind of early, and mid-level adoptions as they came in over the last 6-12 months, and what we show here are four different graphs. You may not be familiar with these graphs so let me get you acquainted a little bit. Google has this great tool, it’s called Google Search Console, and for site owners it’s a place that you can go to see specifically, details about the referral patterns coming off of Google and onto your site. So let me highlight here the specific report that I’m showing you. What I did is I switched from ‘web referrals’ to ‘image driven referrals’ and set the time range to the last twelve months for each of the next four reports. These are four different websites that all got Curator B&A. What we see there, let me add that arrow to the screen for you, you can see the moment that we installed Curator in this particular instance, we immediately saw a climb in both the impressions, the number of times the photos were seen for the client, and the click through activity coming off of Google, from Google image search. Now in this second site we see a very similar, not quite as steep of a hockey stick on the latter half of that graph, but right away after that Curator B&A install we see the impressions and the click throughs climb. Now in not all of the cases did we see and immediate growth, although all of them did result in growth within a three month window. We see the installation of Curator here, we kind of head into that holiday season so we see a bit of decline in activity, and then boom we see those photos take off as we get closer to the end of 2019 right there. 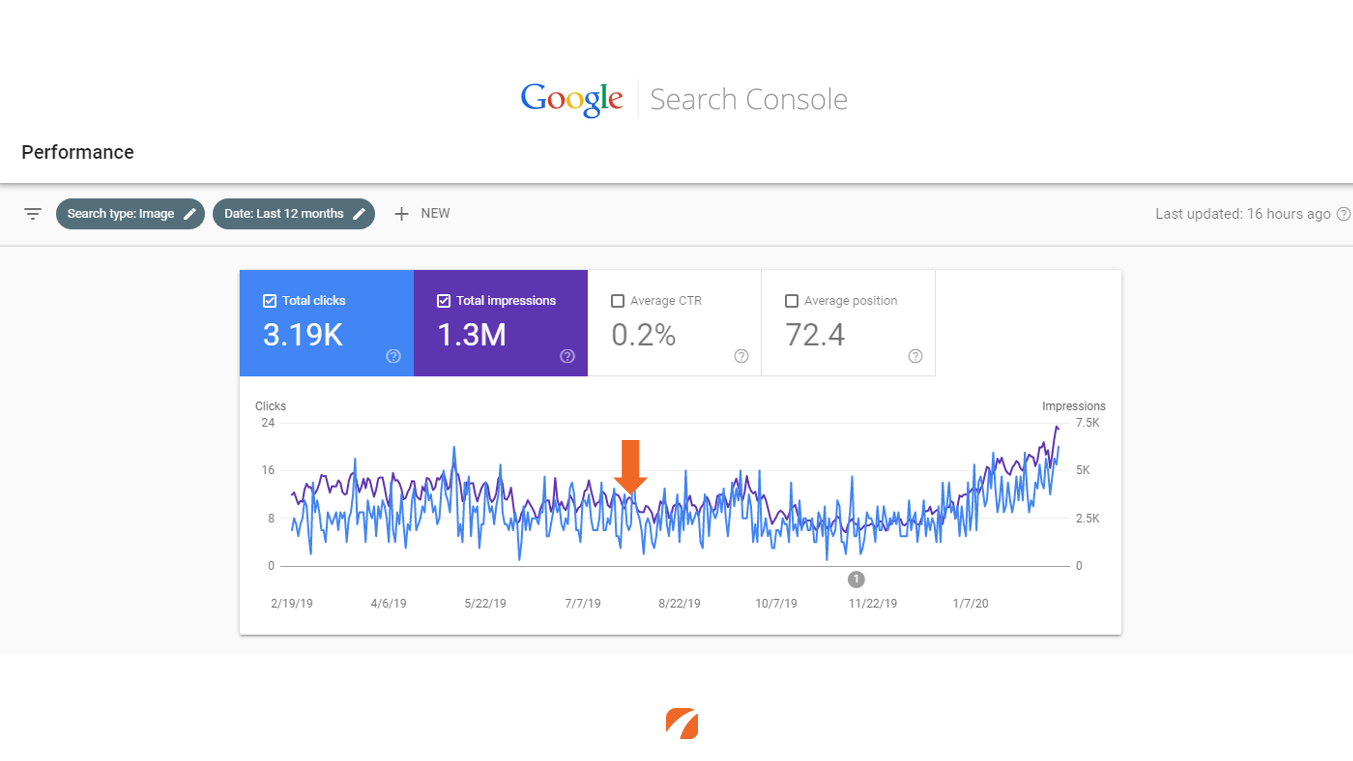 Again, in this fourth and final example, we installed Curator B&A, there’s a couple of days or weeks in there as it starts to ramp up, and then again, everything just takes off. But the increases in impressions and click throughs coming off of Google for image search wasn’t the only benefit we found from installing Curator B&A. On average, after Curator B&A, the number of photo gallery page views in a given month doubled. People are spending twice as much time going through your cases, learning more about your work and what you’re doing. Bounce rates, we were kind of surprised by this metric, were cut on average by 35% so fewer people are hitting your site and bouncing away quickly. We believe this is because they’re deeply engaging with those before and after photos because of the enhanced experience with Curator B&A. Finally, this is perhaps one of the more exciting metrics, that overall this relates directly to those click through increase that we were seeing, is that the number of new users, people who hadn’t previously been on the site, increased by an average of 15% following the installation of Curator B&A. Now granted, not everybody can have the software, so for those that can’t, you might ask yourself, ‘How do I get these same benefits for myself?’. Well it’s not a big secret, but it is a fair degree of work. Let’s run through the essential components of optimizing your before-and-after photos. What is it going to take to get better rankings for your image-based search? The first thing that we have to acknowledge is that every patient, every case, deserves their own page where all of their photos and their story can be featured, because Google ranks pages as much as it ranks images. In addition to that we need to make sure that we’re taking the time to use optimized content. Those are titles, meta descriptions and headings on our pages. Those are the landmarks that give Google a clear understanding that this is a unique case, deserving of it’s own rankings. In addition to that, all of our images need ALT text, or alternative text, and this is one of the key ways Google understands what’s contained in that image. Beyond that, as we go a little bit farther still, is we want to enrich the page with a description of the case below the images at the bottom of the site. You’ve heard us talk about the idea of ‘Schema’ before, this is information about your information that Google has given us permission to hide inside the codes so they can better understand what it is that you’re trying to showcase. Be sure that you’re using Schema to provide that additional layer of detail. Now spoiler alert here, we’ve got some new features that are going to be coming out here in just the next couple of months. Now when we originally engineered this software we had some specific issues we were trying to tackle. We didn’t want our clients having to jump between a bunch of different applications so we put all of the photo editing tools that we need to crop and stitch images right inside the simple web interface. In addition to that, things to protect your images like automated text or image-based watermarking, those were built in there as well. We took the time to ensure that the mobile usability was enhanced and we believe that’s why we’re seeing this increase in user visitation stats and a decrease in the bounce rates because it’s so much more fun, and easier to use to navigate those photos. It automates almost all of the optimization and that’s driving those spikes in referral patterns that we see coming off of Google, and we allow users to save their favorites so it’s easy for them to come back and share information, whether prior to, or during their consult with our clinics about what they liked in the cases that they saw. We’re future-proofing the gallery by saving all of the images including the original ones, and making it easy, because it’s a software as a service, to add new enhancements for optimization in the future and automatically roll them out to all of our Curator B&A subscribers. It snaps into WordPress which is great, and we use a content delivery network to make the photos faster to deliver for anyone in the world. Now, we stopped and that was our initial feature set at release, but we spent the last year serving our clients to learn more about what are some of the big challenges and opportunities that exist related to the use and the distribution of their photos. We were surprised to learn of some really amazing features that relate specifically, and here’s the spoiler alert, to how photos are used in consultation. We are going to be announcing this year, at the ASAPS meeting, the Aesthetic Meeting for 2020, we’re going to be announcing a really exciting new feature set that specifically looks at the moment when you’re face to face with the patient and you’re talking openly about those before-and-after photos.

There’s a new feature coming, we’re not going to tell you exactly what it is yet but you have a general idea of what area it’s going to be in, and we’ll look forward to announcing that on April, 24 as we go into that show.

Now we just did a big hour long webinar with the team over at RealSelf going into to great detail about best practices in capturing, processing, publishing and marketing with your before-and-after photos. Don’t miss that link, it’s right there for you if you want to watch that now, and if you have any questions either about Curator B&A, or about gallery optimization in general, find us on our website, or post your questions below.28